Hollywood: Undisputable Mecca of professional actors, lifelong dream to
celebrity wannabes and, yes, the home of the most famous giant sign in
the world. The shiniest stars in the planet share space with hardcore
moviegoers, excited honeymooners and noisy families, all of them eager
to be a part of the surreal and unreachable world of their idols, either
enrolling a guided tour among their Beverly Hills mansions or just
taking hundreds of photographs to the star-filled sidewalks of the
biggest scenario in the world.

Yes, Hollywood is a formidable
destination. A place where you can feel the excitement of the Oscars
night inside the Kodak Theatre, compare the sizes of your hands and feet
with your favorite actors in the historical landmark Grauman’s Chinese
Theatre, and visit gift shops that are an absolute nirvana for devotes
of the Seventh Art. But if you think the Walk of Fame is the essence of
Hollywood, wait until you read our review of one of the best and most
successful theme parks in America, where you can visit in situ the sets
where the icons of both small and big screen have performed some of
their more memorable roles while enjoying the best attractions that an
amusement park can offer. Movies and rollercoasters…can be anything
better? Welcome to Universal Studios Hollywood, realm of the family
entertainment and absolute paradise for the movie lover.

After a nice stroll in the corporate train, we arrive to our destination. Crossing the gates of Universal Studios is like entering a different world, new and well-known at the same time, where the charm of the traditional Main Street meets a crazy display of Shrek, Spongebob Squarepants and Flintstones themed restaurants, fast-food parlors and shops. Brontoburgers, you said? You got it. The atmosphere is absolutely delightful: you can even find a Little Italy and streets resembling traditional French neighborhoods, with lovely cafés and the famous Moulin Rouge! 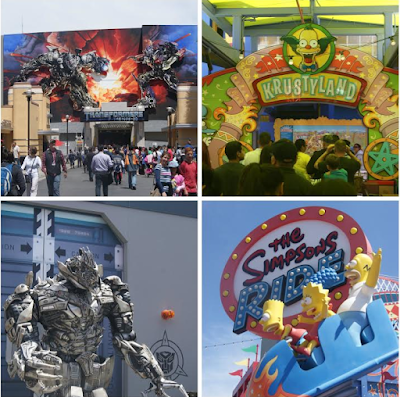 Let’s start with the essentials, shall we? The attractions are the main reason to visit a theme park (obviously), and in Universal Studios they have a variety of choices apt for everyone. More than enjoying a ride, spending the day here is like living for some hours in your favorite TV show or starring the latest summer blockbuster. All the area surrounding the insanely popular The Simpsons Ride is an extremely detailed recreation of Matt Groening’s Springfield, including the chaotic Krustyland and the Kwik-E-Mart (“thank you, come again!”), and entering in the universe of Transformers The Ride 3D is the closest way to unleash hell on those hated Decepticons. Jurassic Park, The Mummy, Despicable Me…all the excitement and irresistible appeal of the most popular movie franchises of all time are a pure joy to discover in this universe of virtual reality, rollercoasters and omnipresent authentic film memorabilia. Yes, that’s correct. Authentic. Strolling in Universal Studios Hollywood is the easiest way to find real automobiles used in the set of movies like Inglorious Bastards and Public Enemy, as well as the Apollo 13 space shuttle. Specially impressive is the pavilion full of props, sketches, costumes, scripts and storyboards directly gathered from productions like Battlestar Galactica, Jaws, American Gangster, Coraline, etc. You can find the Best Picture Oscar award for the film The Sting and the original letter that the automobile tycoon John Z. Delorean wrote to the creators of Back to the Future thanking the big role of his great creation in the movie. How about that. Pure history, folks. 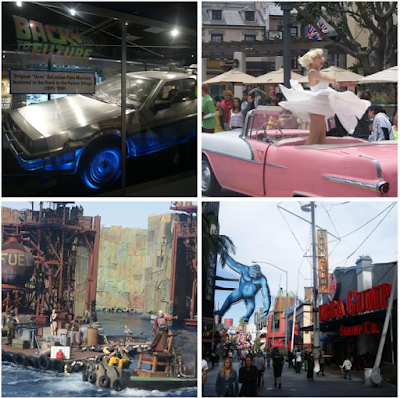 But if we have to choose one single thing that completely defines Universal Studios Hollywood as the best place on Earth for the movie geek is the tram tour through the studios, an unforgettable visit to the most famous movies and TV original sets. The tour, hosted by the always hilarious Jimmy Fallon (his catchy jingle, “Have a Tramtasic day!”, got stuck in our minds for the rest of the day) cuts across the original dressing rooms of legends like Alfred Hitchcock, current recording studios and prefabricated sets in a completely immersive learning experience where we were taught over the basics of creating the main illusions displayed on screen: devastated cities, floods, cardboard villages…all the magic of moviemaking it’s here. The tram allows you to fulfill true dreams for any fan, like entering the real Back to the Future’s Hill Valley, being attacked by a white shark in the Amity Island of Jaws, seeing in action the delusional schemes of the maniac of Psycho below the Bates Motel, venture in the hardwood vegetation of Jurassic Park’s Nublar Island or being caught in the middle of a jaw-dropping battle between King Kong and a T-Rex. This visit is something that you must do before you die. Period.

What a better way of say farewell to this amazing place (ok, prior to the final obligated purchases in the souvenir shops!) tan enjoying one of the live-action shows? Waterworld is not only a hell of an amazing show, but also features performers seen in real Hollywood movies, like Transformers. Wow!

To sum up, if you love movies and want to spend an awesome day with your family or friends, Universal Studios Hollywood is the right choice. Amazing attractions, powerful live shows and unique cinema experiences, apt for all ages and located only a few minutes away from the Earth’s capitol of the entertainment.

Have you ever visited Universal Studios Hollywood? What was your impression? 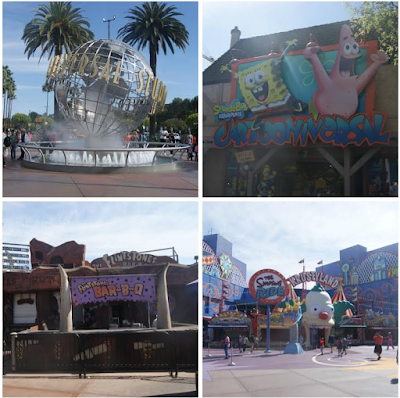 Disclosure level 1: Writer got a press ticket to visit the park. All other expenses (food, travel, lodging…) were covered by the writer. Writer received NO economic compensation to write the post.