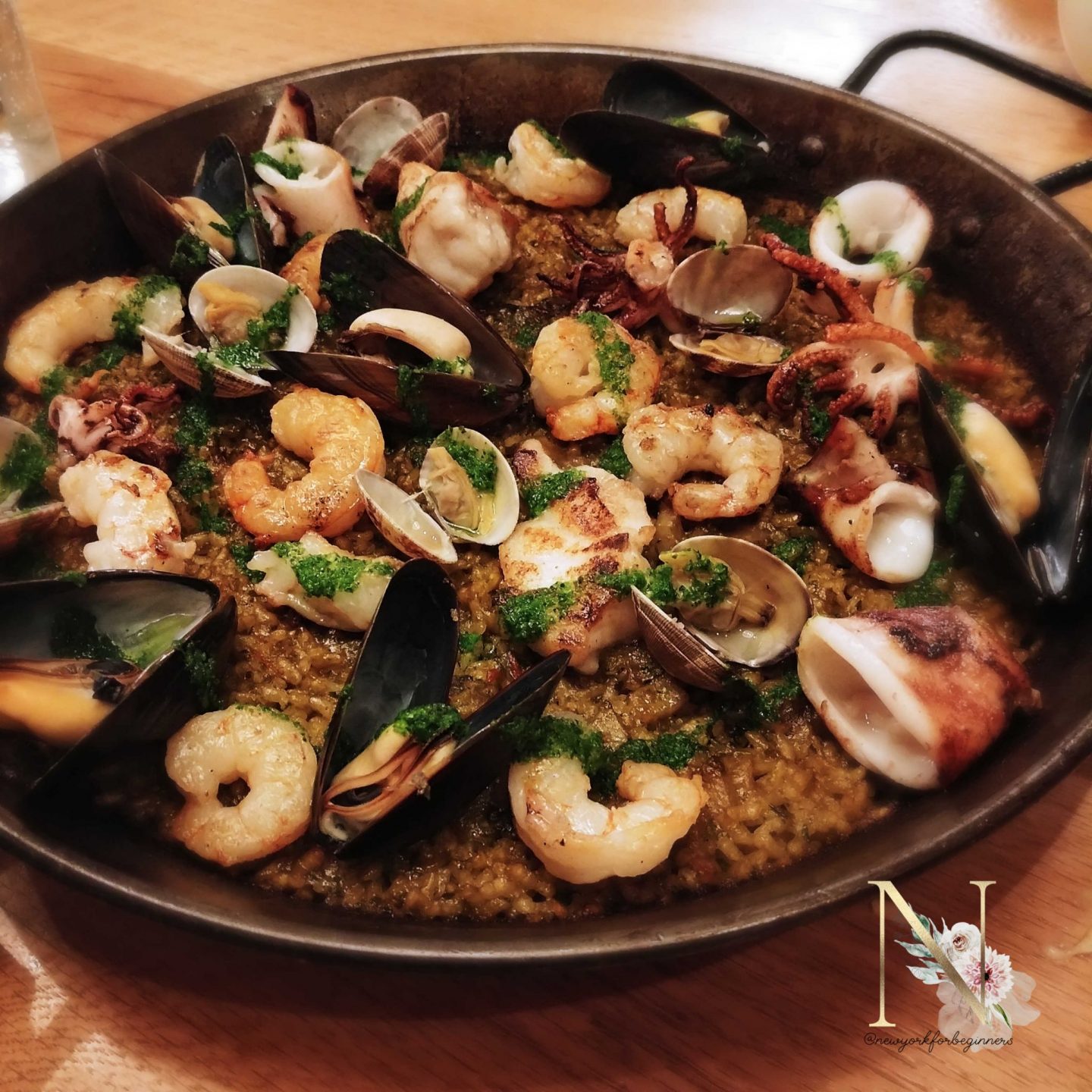 Boqueria successfully manages to accomplish what many have tried, but only a few get done: bring to New York the best food from Spain with a refreshing twist. Granted, it is possible to get ahold of delicatessen foods from every part of the world in New York City. Korean BBQ, tacos al pastor, Polish pierogis, and, of course, some of the best pizza you can find anywhere. But, as it turns out, eating true, real Spanish food, is something way more complicated that it should be in such a gastronomic mecca. 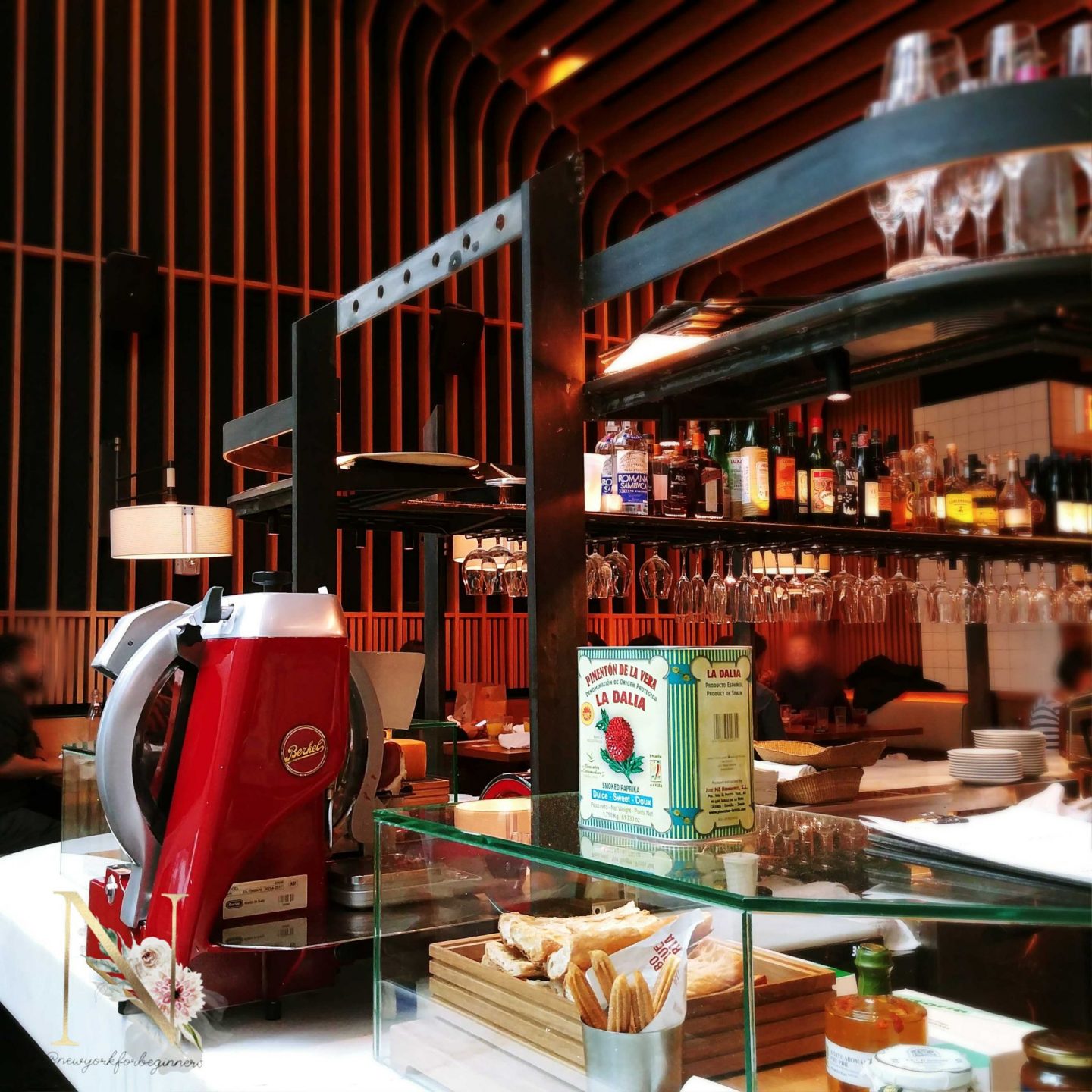 Now, hold that thought. Forget those delish breakfast burritos and Peruvian ceviches. We are talking about “Spanish food” in the strict sense of the word: gastronomic treasures directly imported from Spain. And, let’s face it, most of times those cool “tapas” you try at that trendy Manhattan brunch spot are not the real deal, but some bold fusion experiment aimed to flock food bloggers. Something  you, somehow, already kinda suspected. But fear not. Nothing is impossible in this city, not even delight ourselves with an authentic Catalan pan tumaca or a seafood paella that tastes the way it should. Welcome, amigos, to Boqueria, a celebration of Spanish cuisine.

Spain’s finest at your table 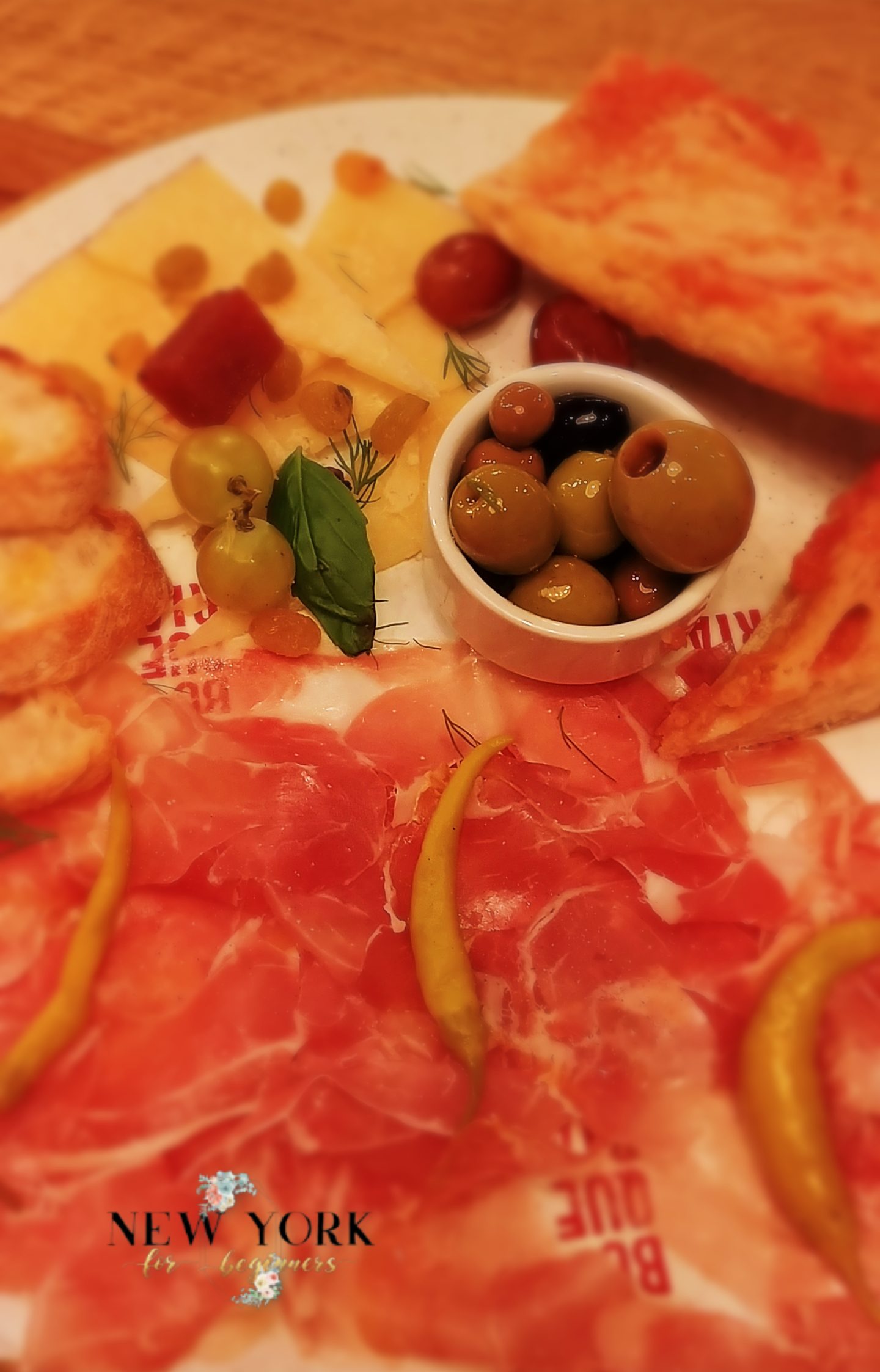 A true Iberian cuisine staple in Manhattan (with successfully proven venues at SoHo, Upper East Side, and Flatiron), Boqueria opened just a few months ago its new restaurant at the heart of Garment District, across the street from The New York Times headquarters and right next to the fellow Spanish staple AC Hotel. The festive vibe in their popular weekend brunch service is very American. But any similarities with the traditional mimosa-and-Benedictine eggs-fest you may have in mind ends here. A quick glance to the menu is enough to forget our worries about it being true Spanish fare or not (and, believe me, it matters when you haven’t tasted a good paella in months.) Hearty classics such as the tortilla de patatas, revuelto de gambas, boquerones, or croquetas de jamón are joined by unexpected regional specialties. Escalivada? Pulpo a la gallega? Pollo a l’ast? Now, that sounds more like the real deal to us. For that reason, we decided to go with a selection of Spain greatest hits to have a general idea of what Boqueria could offer. And boy, were we pleased. 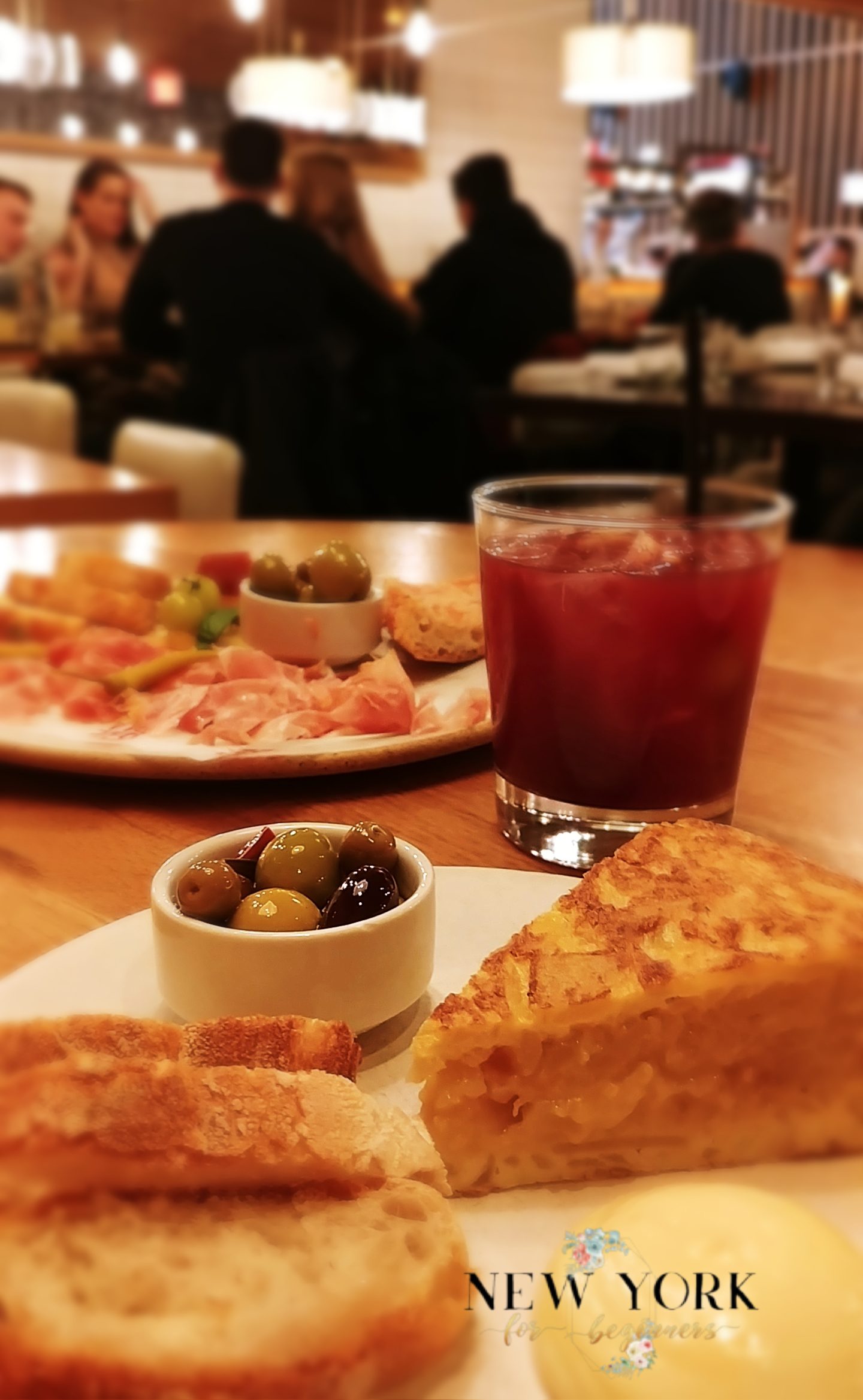 Just a few minutes after our order, the perfect introduction: a generous plate with jamón serrano, cheese, and a pan tumaca that perfectly combined the tomato spread and the olive oil with a potent hint of garlic. But it wasn’t after we were introduced to the tortilla de patatas when we acknowledged that we were, indeed, at the right place to be. A key culinary specialty, able to sort out the true connoisseur of what’s cooking in Spain from the mere wannabe. Fortunately, the results were glaring: a perfect tapa de tortilla, well done at the back, a bit rare through the tip, and overflowing with perfectly cooked patatas. The exact amount of sliced onion makes this tortilla a juicy success. Enough to make an expat cry of joy.

Joining the party, a top-notch, home-made alioli (oil and garlic white sauce), blue cheese-filled dates and a sangría pitcher made the experience complete. Squared croquetas de jamón, avant-garde in appearance but with a creamy, typical Spanish taste, put our doubts to rest: Boqueria tastes like España.

Paella, the way it should be 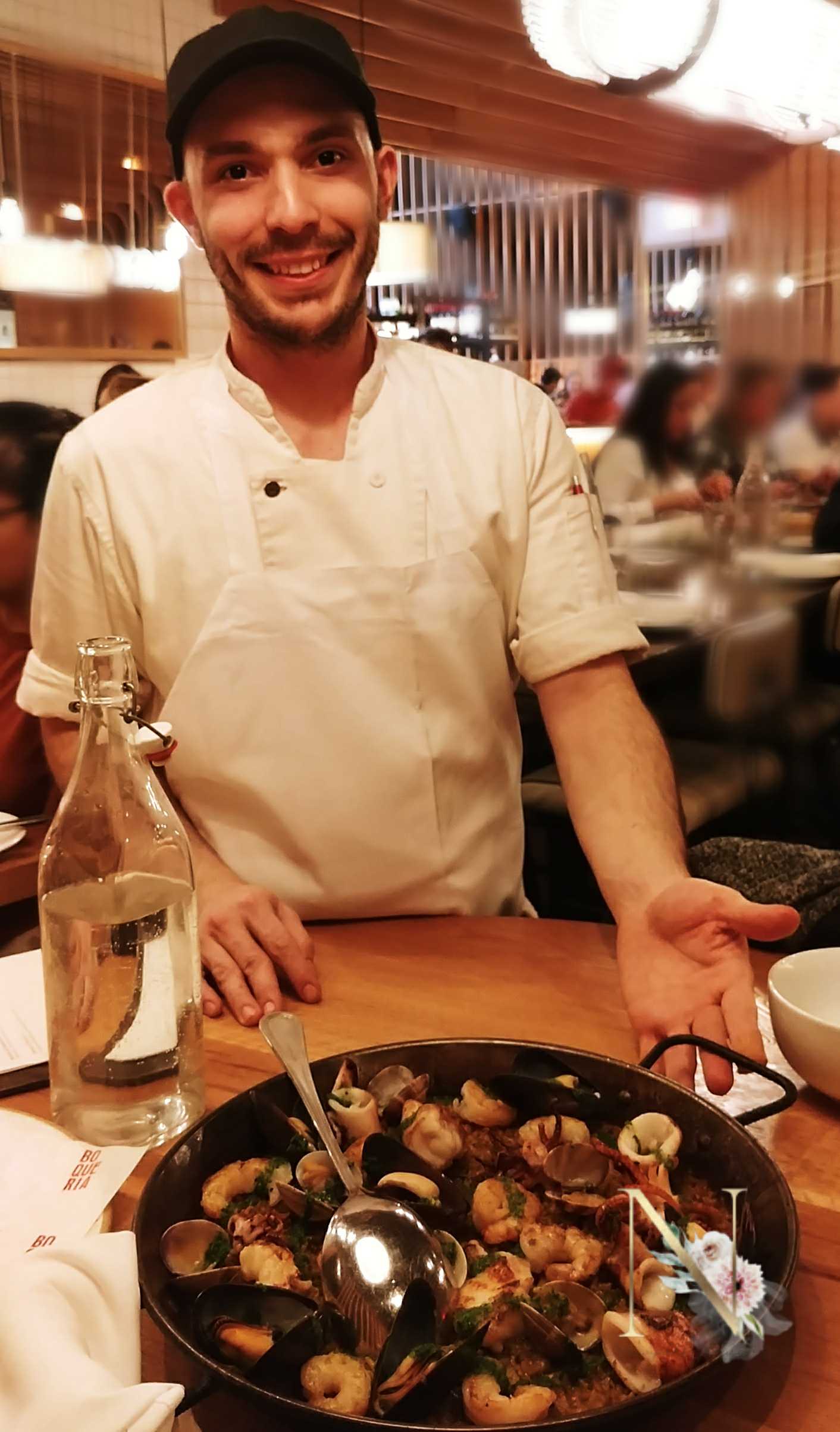 Any Spaniard knows that tapas are just the start of a true foodie story: A prelude to the deliciousness of a main dish. In this case, Spain’s most international icon: the paella. Following the suggestions of Amado, the attentive and ever professional manager of the restaurant, we decided to go with seafood paella. The die was cast. I decided to ask for some of that spectacular alioli I had earlier, just in case. 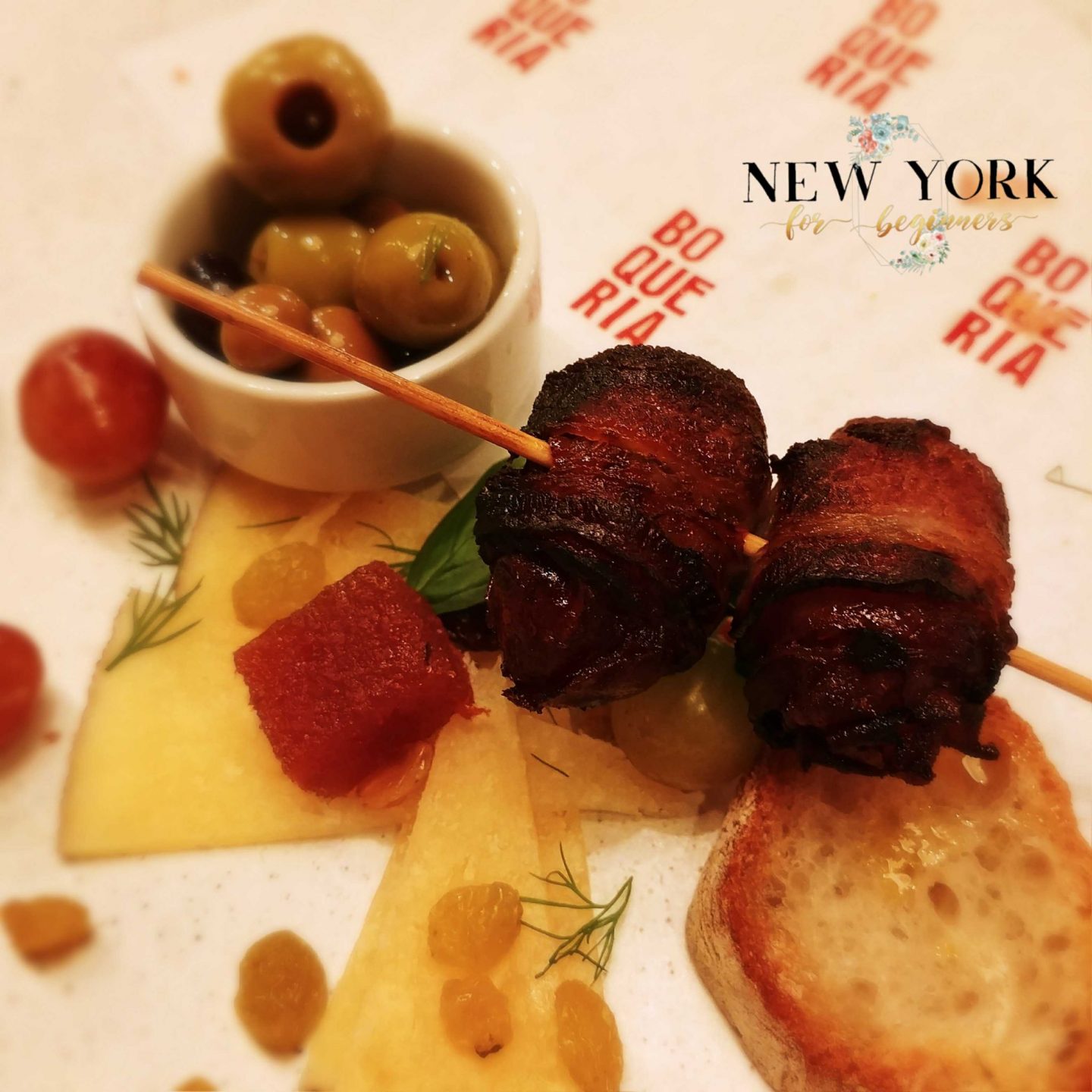 However, when our paella finally arrived, we couldn’t believe our eyes. Huge chunks of sepia and monkfish, clams and mussels everywhere, a truly appetizing-looking grain, and, thank God, no trace at all of that completely-out-of-place chorizo thrown into the mix by other so-called “Spanish restaurants.” Luckily, looks weren’t deceiving in this case. The bomba rice was perfectly cooked, and the rest of ingredients juicy and delicious. Now, that’s a real paella, New York! Although we were pretty stuffed at this point, we did our best to finish it. Finding something like this an ocean away from Spain doesn’t happen every day, after all.

Dessert: Churros With a Twist 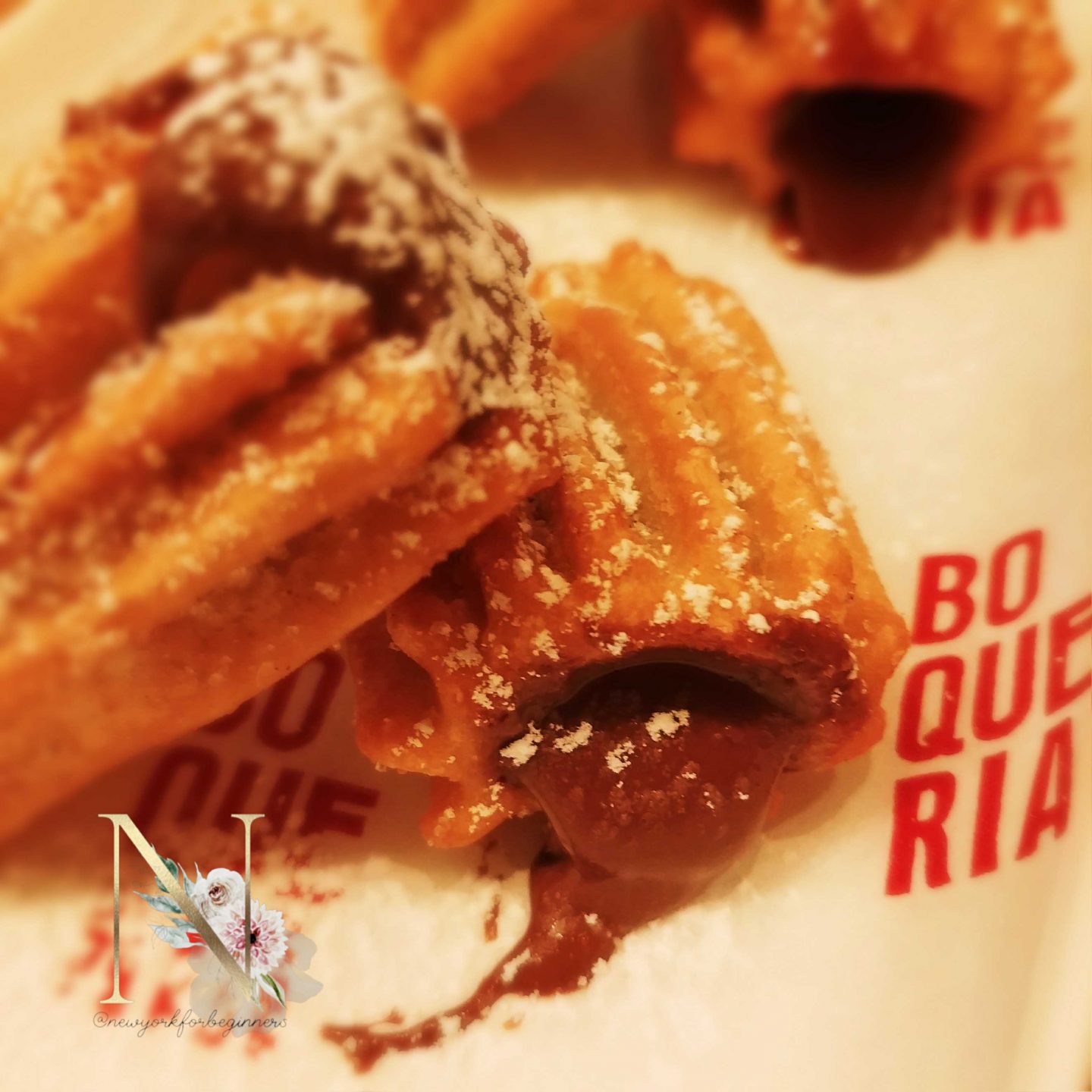 The moment we personally congratulated the chef, we were convinced to try the perfect dessert to put a cherry on top of the meal: churro bites filled with Nutella and dulce de leche. And yeah, they were as yummy as it sound. 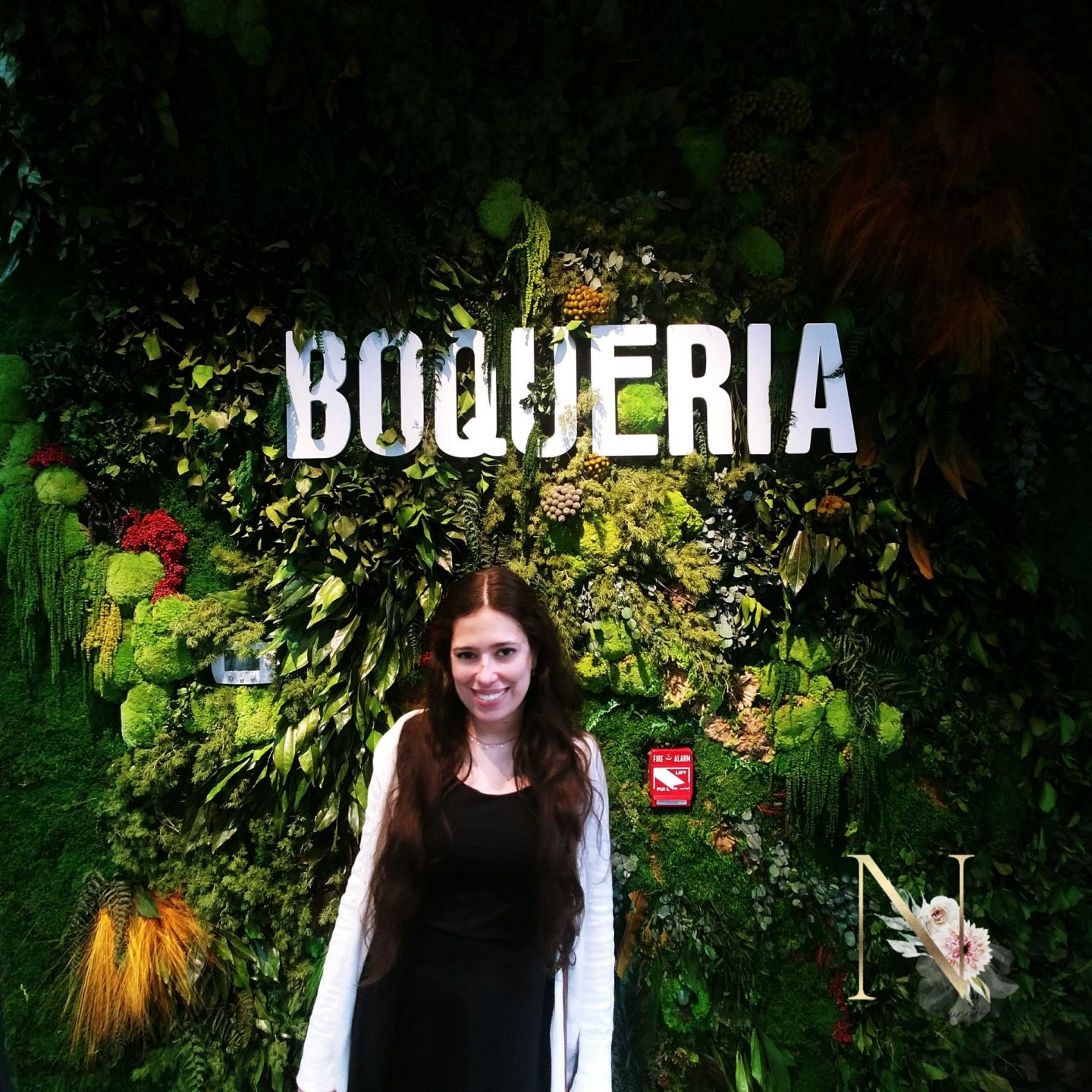 We just couldn’t be happier after our visit to Boqueria. Our initial skepticism was completely obliterated against the evidence: “yes, we can” enjoy quality Spanish food in New York. We left pending for our next visit its brunch menu, the promising Catalan breakfast Esmorzars de Forquilla, and, of course, the Experiencia Boqueria, a complete tasting menu featuring the best dishes from this new must place to go in Midtown Manhattan.

Make your reservation at: https://boqueriarestaurant.com/tapas-bar-nyc-west-40th/

The author received no compensation to write this post. Boqueria kindly invited us to taste their food for editorial consideration. Read our disclosure here.