Imagine I told you there is one book that captures the essence of New York: You’d probably know I am lying! However, what if I told you I found one book with extremely insightful stories of the many perspectives New York City offers? I’m sure that premise grabs your attention. So did mine.

My New York: Celebrities Talk About the City is a compelling book written and edited by Alessandra Mattanza, who aside from a gifted writer happens to be a screenwriter and a fine-art photographer. This book, which in my opinion constitutes an ode to the chaotic essence of the Big Apple, shares the best of New York City through the eyes of 19 of the city’s most iconic residents: Al Pacino, Robert De Niro, Martin Scorsese, Woody Allen, Spike Lee, James Franco, Taylor Swift, Moby, Jay McInerney, Daniel Libeskind, Jack Huston, Candace Bushnell, Cathleen Shine, Mario Batali, Siri
Hustvedt, Steve McCurry, Cortney and Bob Novogratz, Lidia Bastianich and Yoko Ono. 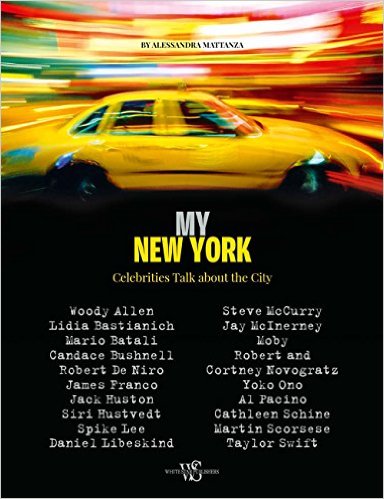 Beautifully edited with Alessandra’s beautiful pictures, this book intertwines some iconic landmarks with personal insights of artists, writers, and innovators who helped create the image of New York worldwide. At times intimate, this book offers a different perspective to any Gothamist who thinks he’s seen it all. What makes this book special is that, at the same time, those beginners in New York like myself can randomly browse its pages to find paths off the beaten track that happen to resonate with them. In the end, who else can capture the attitude, the sights, the sounds, the smells and the vibe of a city that constantly evolves than those who help write its story?

My New York: Celebrities Talk About the City is one of those few books I find myself constantly browsing. For some reason, its pictures and its stories are as changing as New York City itself. Depending on the day I read it, it offers me a totally new perspective, and leaves me with the wonderful feeling that I’ll never be able to know all of New York City. Highly giftable in the upcoming holidays, it is ideal for those bookworms who prefer their books with pictures.

My New York: Celebrities Talk About the City by Alessandra Mattanza (WhiteStar Publishers) is available for sale and retails for $35.